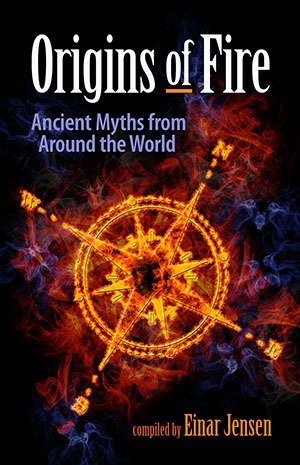 Origins of Fire: Ancient Myths From Around the World (ebook)

Origins of Fire: Ancient Myths From Around the World

(your choice of epub or Kindle/mobi versions)

Origins of Fire is an entertaining collection of 29 fire-origin myths from diverse cultures separated by vast geographical distances, yet sharing recurring themes, such as fire’s representation of divine power, over and above its practical uses; the strong presence of animals possessing magical powers; and the need for trickery to obtain fire.

With animals that creep, crawl, swim, run and fly, these myths and stories originate from throughout North America and Australia, as well as Botswana, Bay of Bengal, Borneo, Melanesia, Samoa, and Nigeria. You’ll read about birds (kingfishers, ostriches, buzzards, hawks, crows, mud hens), toads and frogs, spiders and snakes, coyotes and cougars, squirrels and rabbits, dogs and wolverines, and even the mighty bear, the little mouse and Le-che-che, the hummingbird.

“When I was growing up I greatly enjoyed reading Rudyard Kipling’s Just So Stories, recounting the colorful and fanciful ways various animals came to be the way they are,” says editor Einar Jensen. “When I later went to college, Native American literature and history courses revived my interest in ancient stories that describe how and why our world is the way it is. Later, when I began researching new strategies for teaching our kids about fire, I turned to the fire myths related here.”

Einar Jensen is a veteran community risk reduction coordinator committed to teaching fire safety, injury prevention, and disaster preparedness. Prior to leaving the mountains, he was a volunteer firefighter for Clear Creek Fire Authority for twelve years and, concurrently, volunteered for eight years for Clear Creek Sheriff's Office Marmot Wildfire Crew. He studied environmental history at the University of Montana and University of Puget Sound and considers himself a recovering print journalist. He is member of the National Science Teaching Association and Colorado Risk Reduction Network.

Save this product for later
Display prices in: USD